On Monday 3 and Tuesday 4 February, all St. Mary’s Campus students attended YMCA Lady Northcote in Glenmore for a two-day bonding experience. The overnight stay began with an introduction to most of the staff, before all students were separated into their cabin groups.

We then leaped into the activities for Day 1. All classes had a different rotation consisting of three activities each day. Those activities were mountain biking, canoeing, Giant Swing, low ropes and initiatives, high ropes and Leap of Faith and, finally, archery.

Mountain biking was an interesting activity in which we all went for a 7-8km bike ride, doing a giant rotation of the premises. Roughly halfway through the bike ride, there was a basketball court, on which we played a game called Gladiator. The only aim in Gladiator is to stay on your bike without touching the ground or going outside the basketball barrier. Although the instructor won most of the time, it was hilarious and lots of fun! 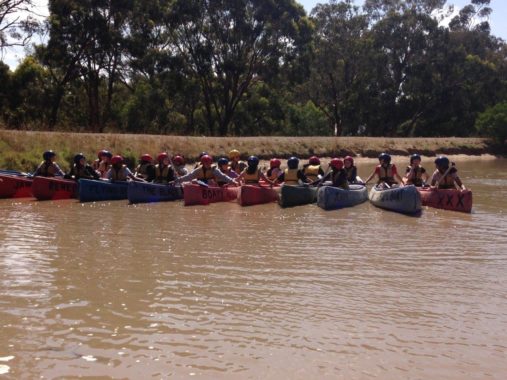 At canoeing, everyone got into pairs and jumped in a canoe. Together we had to navigate around the dam and try not to fall in the water. We also played a game in which you had to move around the dam, collecting items while doing two laps. Whoever high-fived the instructor’s hand first won. Although there were some difficulties at first, everyone had lots of fun and, sadly, a lot of us got soaking wet!

Giant Swing is a terrifying yet amazing experience in which it isn’t for people who are afraid of heights! All you had to do was pull a rope and down you went! Of course, if it wasn’t for all your classmates, you wouldn’t be up there anyway. If you weren’t up in the sky, you had the pull a rope as hard as you can to get the person in the air nice and high so you can really hear them scream!

After a couple of rotations on the first day, we had some Free Time. As you can imagine from the name, Free Time meant we could do whatever we wanted, which went for roughly two hours. A popular activity during Free Time was a game of GaGa Ball. GaGa Ball is a game in which you have to try to hit people with a soft ball below the knees within a GaGa Ball ring. Not only do you have to be offensive, you have to dodge the ball as well! To make it fair to all other competitors, you are only allowed to jump when the ball is dangerously close twice per game. This was a very fun and fiery game, not only students played though; Mr Massara, as well as our Principal Mr Kennedy, joined in too! Since it was such as a great initiative for all students and teachers to join in and play, we are in the process of trying to get a GaGa Ball ring set up at St. Mary’s as well.

After an eventful afternoon, it is time for what most students wait for: dinner. While some unlucky kids are on setup and clean-up duties, all the others were munching into to some wonderful pasta. On the menu was penne with the choice of Carbonara or Bolognese sauce, garlic bread and leafy greens. Of course, since there were some (heaps!) heavy eaters in the room, seconds were served as soon as the last person sat down.

After dinner, to commemorate the start of our two-term journey at St. Mary’s, we had a short liturgy out of respect to our catholic identity. Although it was short, it was the motivation most of us needed to survive the semester. As well as the liturgy, we watched Jumanji: Welcome to the Jungle, as an obscure way to teach students persistence, considering all the challenges the characters in the movie have to overcome.

By the time the movie finished, it was already 10:30pm and well and truly time for a quick scurry to bed. After long talks and chats, lights were out at 11:00pm and the first day had come to an end.

In the very early parts of Tuesday morning, some children were smart enough to have their showers ahead of everyone else so they could have some Free Time before breakfast. Of course, there were the energetic people who played GaGa at 7:15am in the morning, while there were others who stayed in their cabins until 8:00am instead.

Shortly after everyone had packed their luggage, it was time for breakfast. On the menu for Tuesday morning, was a broad variety of healthy cereals to choose from as well as toast with multiple spreads. However, the choice of the day was pancakes. They flew off the bench like hotcakes!

After all the clean-up had finished and everyone had gathered together, it was time for another day of spectacular new activities.

At low ropes, in groups of four, you had a variety of courses you could try. It was necessary that you were in a group for a few reasons. One of them being, if you were on one of the courses i.e. rock climbing, and you accidentally slip, your teammates can get you back up on the course without you sustaining any injuries. From letting your teammates help you, you learn to have trust in them, which will strengthen your relationship. In Initiatives it’s the same, except you have to trust everyone as you play games as a class. One of the challenges we had to do, was balance on a giant beam for as long as possible as a whole class. Our class was only been on there for 27 secs, but the record was a phenomenal 45 minutes!

At high ropes and Leap of Faith, you had to place all your trust in the people guiding you across the ropes to your end destination, or up the ladder to your leap of faith. High ropes was a complex ropes course done at least 10-12 metres in the air. We all had to get from one side to the other on the specific course. Depending how far right on the course you were, the harder it got. Leap of Faith is a very simple yet very frightening task, during which you jump off a pole and touch a buoy hanging away from the little podium you start on. With the guidance of classmates, one person would go up a ladder onto a pole then, once at the top, simply jumped off, thus calling it the Leap of Faith.

After two activities, it was around 10:15am and time for a complimentary morning tea by the teachers. Lots of watermelon and cupcakes were passed around in just a couple of minutes because, right afterwards, was our very last activity of the whole camp. 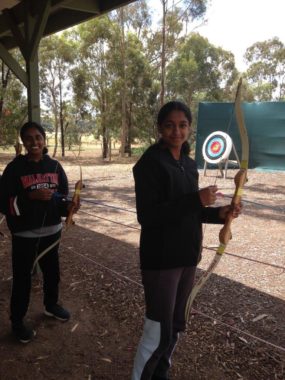 Archery is a sport in which you have a target with ten areas, a bow, a couple of arrows and your arm pulling back for a bulls-eye. Of course, for those not fully skilled, there was a giant green net at the back for those shots that went a bit off course. Even though continuously shooting can be fun, there was a very competitive game played and it was called Pizza. The aim of the game was to, within your team, hit every colour, in order! It was super competitive, however, it was a lot of laughs and heaps of fun.

Before we knew it, it was 12:00pm and time for our very last event of the trip, lunch. All students joined together at the shared BBQ area and had a huge burger lunch, which was thoroughly enjoyed by everyone. After that, it was home, sweet home.

We are all very grateful for the amazing experiences that we had and look forward to more fun at St. Mary’s for the rest of the semester.